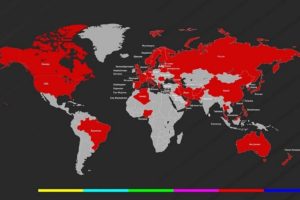 Due to the spread of the Covid-19 coronavirus, the factories of LG and Samsung were stopped in South Korea. This will affect, inter alia, the production of flagship smartphones Samsung Galaxy Z Flip and Galaxy S20. With regards to LG – we are talking about the Innoteck factory, which produces camera modules for Apple.

At the current in South Korea, the diagnosis of Covid-19 was confirmed in 4335 people, 26 patients died, 30 people recovered.

Analysts are seriously worried about the situation, Qualcomm shares their concerns and sees it as a threat to the entire industry, while Sony became the fifth company to decline to participate in the conference due to the virus.

The coronavirus epidemic, which led to the death of more than 900 people and infection of more than 40 thousand, turned out to be a real threat not only to people’s lives, but also to the gadget industry. Manufacturers’ plans to deploy 5G in China had to be slowed down, planned launches were canceled or delayed due to a ban on major public events, while empty streets led to a significant decrease in smartphone sales. Canalys analysts expect shipments to fall by 50% in the first quarter from the previous year; IDC expects a 30% cut.

However, the problems affected not only the launch of finished products on the market, but also the production itself. Foxconn has received permission to resume operations at its Zhengzou plant, although only 10% have so far – 16,000 people have left. The main factory in Shenzhen is still closed, it will be re-checked this week. Together, these factories form the bulk of the iPhone assembly line, which means delays will affect global shipments by cutting them. It got to the point that Foxconn built mask production for its employees.

The situation is similar for other manufacturers, so slowing down the ability of brands to introduce new products threatens everyone, but Oppo hopes to cope with the help of foreign factories. Product launches in the medium to long term may also be influenced by circumstances.

According to TrendForce, the production of smartphones will be reduced worldwide by 12% to a five-year low of 275 million units. Apple can reduce it by 10%, Huawei – by 15%, Samsung – by only 3%, since the main “strength” of the company is located in Vietnam.

Qualcomm is experiencing extreme uncertainty and cannot accurately predict how the virus will affect interest in smartphones and the supply chain, but convinces analysts that it can overcome difficulties with the help of the markets of the USA, Korea and Japan. Nevertheless, investors are unhappy and the value of the shares fell by 3.75%. The fact is that the company also focused on 5G, which started most actively in China, where it is possible to produce cheaper smartphones with support for fifth-generation networks.

Difficulties extend not only to the giants of the IT market and go far beyond the borders of one country. Sony, LG, Amazon, Ericsson and Nvida refused to participate in the Mobile World Congress, which will be held in late February in Barcelona, ​​for security reasons. At the same time, the organizers refuse access to all people from Hubei Province, and visitors from China are required to prove that they were outside their homeland for two or more weeks before the events. Despite the fact that only two cases were confirmed in Spain, the event adopted a “policy of no handshakes” and introduced a rule for changing microphones between speakers. Huawei and ZTE will be present, but with a European team.